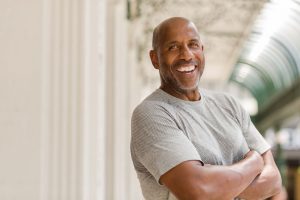 What is Peyronie’s Disease?

Peyronie’s disease is a condition in which abnormal fibrotic scar occurs in genetically susceptible men. This causes pain initially, and a penile curvature to occur. And particularly severe cases men can also develop problems with erections.

What is the Active Phase and Passive Phase of Peyronie’s Disease?

During the active phase of Perrone’s disease scar tissue is actively being laid down usually the first manifestation of this is pain but sometimes patients don’t start to get curvature right away. The active phase usually last for a few months and the condition worsens during this time. With the passive phase of the disease the scar tissue, or Peyronie’s plaque,  has been laid down no additional scar tissue grows. Pain has often resolved and patients present with penile curvature. On exam,  a hard plaque can be felt in the penis. Usually this plaque is located on the side of the curvature.

How is Peyronies Disease Treated?

There are different ways of treating Perrone’s disease. One option is just to monitor the problem. Usually the curvature is not bothersome or severe enough for patients and they prefer to watch just watch it. A second option is to inject medications into the Peyronies plaque to soften it up. The most common medication injected is called Xiaflex. A third option is surgery. Surgery is generally more definitive and successful than the injections but it does have some risks.

What is Surgery for Peyronies’s Disease?

There are generally two types of surgeries. In one surgery permanent sutures are placed on the opposite side of the penile curvature to straighten out the penis – this procedure is called a penile plication. It works very well to straighten out the penis but has risk of shortening the penis. A second option, is to put a graft, or additional tissue, where the plaque is located and possibly also cut out the plaque.  The advantage of this option is that there is no penile shortening. The disadvantage is that there is a small risk of worsened erections after this surgery.

What Option is Best for Treating my Peyronies Disease?

It depends a lot on the nature of your disease how thick the plaque is and how much it bothers you. It also depends on what type of risks you’re willing to take. Ultimately after discussing this with Dr. Purohit you can make a decision that best suits you and your needs.

YES! He accepts all major insurances including Medicaid and Medicare.

What Are Dr. Purohit’s Results in Peyronies Disease?

Very good! There are no guarantees but his results compare favorably with anyone in the world.